Independent British films are gaining more and more attention internationally beyond Europe and North America. This year, Ryan Braund’s Absolute Denial (represented by SC Films International) is selected as part of the Official Screening at the Shanghai International Film Festival (June 11 – 20) in China. We have been interacting with Ryan since the news was announced on social media, spreading this good news among our network and also conducted this interview below to find out more about his creative journey.

For those who may not know, can you tell me more about your animation, Absolute Denial?

Ryan: Absolute Denial is a feature-length animation about a reclusive programmer whose perception of reality is tested when he creates a supercomputer of unprecedented power. I wrote and animated the entire film on my own during lockdown in the UK and now, amazingly, it is enjoying a fantastic festival run and has been acquired by a brilliant international sales agent. It’s a very personal film to me, being the result of a life-long ambition to make a feature film and I’m very fortunate to have found an incredible voice cast and amazing composer to help bring it to life.

The plot of your animation is intriguing, what motivated such a storyline?

Ryan: The storyline initially sprung from the fascinating idea that humans can be hacked. I thought it would be great to explore how this process might unfold between two powerful minds and this eventually led to the exploration of what makes us so vulnerable. I liked the idea of visually depicting what our cognitive faults might look like on screen.

How do you think our relationship with technology is today? Is your animation a commentary on such relationships? Between people, between technology? If so, how?

Ryan: The animation is not specifically a commentary on our relationship with technology, it’s more a story about struggling with anxiety, paranoia and the complexity of our own minds. The tech / sci-fi setting just helped facilitate that. But there’s no doubt that technology can sometimes create the illusion that we are ‘connected’ and closer than ever when in reality the opposite is happening. Maybe we are becoming less introspective and more ‘plugged-in’ to our online personas, possibly resulting in missing a lot of red flags in regards to our own mental wellbeing. 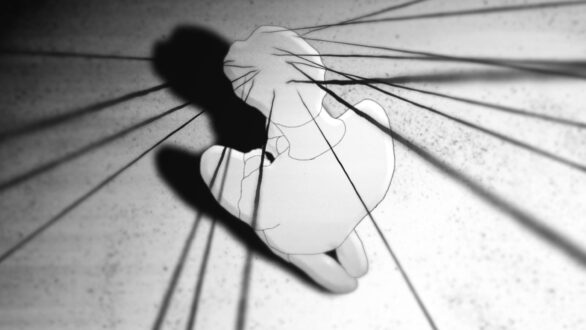 How did you find the process of creating this animation? Any unexpected challenges you had to overcome?

Ryan: Making this animation was one of the most difficult and draining projects I have ever undertaken. Animation takes an incredibly long time to produce, so to help cope with the overwhelming job of animating an entire feature film I gave myself very strict deadlines which resulted in me animating 10 hours a day, 7 days a week for the first three months and then 6 days a week for a further 6 months. It was a true labour of love. The hardest part by far was to just keep going. There were also some heartbreaking moments when I had to cut sequences I had spent weeks creating or, in some cases, reanimate whole scenes after improving my technique.

Ryan: Being officially selected for Shanghai International Film Festival makes it all worth it. For such a massive festival to select a film made predominantly by one person, on a tiny budget, in a small room here in the UK is just incredible. I still genuinely don’t believe it is happening and I’m extremely flattered. I’m seeing more and more independent animations being produced as the technology makes the painstaking work more achievable on a shoestring budget so I’m expecting a surge of indie animated features in the next few decades. I’m working on another right now! There’s a real lack of mature animation, especially in the West, so I’m hoping we can fill that gap a bit.

From your own experiences in having your animation shown in one of the biggest film festivals in China, what do you make of the UK-China relationship within the film industry? Do you think there are aspects of working together that can be strengthened?

Ryan: I believe there is so much more we can exchange between the UK and China in terms of film and talent. Being such a massive market China is an obvious potential collaborator when it comes to filmmaking and distribution but it would be great to see it done for the purpose of multiculturalism and exchange of arts. I know a lot of people here, including myself, who are starting to binge-watch Asian cinema in order to catch up on all the brilliant films they’ve missed out on due to a lack of exposure or knowledge on the market. Filmmaking from Japan and South Korea have a huge following already in the West and it’s still growing, it’d be amazing to see the same fanaticism for Chinese films. I don’t know how my movie will be received in China but I really hope it finds an audience there!

Shanghai Film Festival have been fantastic in accommodating us so far, I just really wish I could’ve physically attended the event. China is a country I’ve never been to so I would have loved to have had the opportunity to explore and learn more about it. Hopefully this is the start of a great relationship between us and SIFF and we’ll see more of our films, and us, there in the future!

Is there any piece of advice you can provide to those who want to pursue similar goals?

Ryan: I spent years attempting to make a feature and failing for various reasons. It doesn’t necessarily mean you’re a bad filmmaker, it just means it wasn’t the right time or the right project. In hindsight those years weren’t wasted, I was just going through a learning curve in order to be better prepared for the moment it all clicked into place!