Somewhere over the rainbow.

‘Colour Across Chinese Cinemas’ explores the kaleidoscopic history of colour filmmaking across film cultures of the Chinese-speaking world. From the earliest colouring techniques of the silent era to more recent digital innovations, these films show that colour has been central to both the artistic and political development of Chinese-language cinema. The films gathered in this series show how filmmakers developed distinctive applications for colour in films across China, Hong Kong, and Taiwan, responding to the unique cultural and political climates of these regions. Far from simply delighting the eye, these films show how colour served a range of purposes, whether enhancing the emotive power of government propaganda, conjuring lavish period fantasies, or lending naturalism to realist styles.

All film are free and open to the public, and will be in Chinese with English subtitles unless otherwise noted. 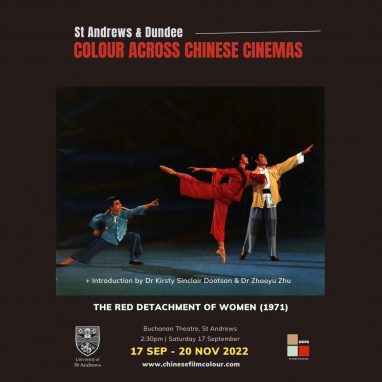 This dazzling propaganda dance film was made at the height of China’s Cultural Revolution, intended to stir the revolutionary consciousness of the masses with its bold colours, daring choreography and stirring narrative. The film tracks the political awakening of Wu Qinghua (Xue Jinghua), who escapes imprisonment by the cruel landowner Nan Batian (Li Chengxiang) to join a female-led detachment of communist soldiers. The film was based on the real experiences of female fighters during the Chinese Civil War, and had already been adapted for the screen in 1960 in colour by Xie Jin. As one of a small number of yangbanxi, or Revolutionary Model Stage Works made by Mao’s government and screened all over China to help spread socialist ideology, the film is one of the most-watched in Chinese history. However, while the film was made during a period of hostility between China and the West, the film presents an extraordinary hybrid of Eastern and Western visual styles. This fusion is not only found in its combination of European ballet and Chinese stage traditions, but also in its colour design. Simultaneously using colour, notably reds, for their symbolic associations in Chinese theatrical and political culture, the film was also undoubtedly intended to echo Hollywood Technicolor musicals. With colour direction overseen by Chairman Mao’s wife (and former actress) Jiang Qing, who routinely watched British and American Technicolor films during its production, we find echoes of Busby Berkeley and Powell and Pressburger in its vivid combination of hues and decorative visual design. As both a political persuasion piece and a lush visual spectacle, the film defies the label of mere propaganda.

Please note this film is not subtitled but contains no spoken dialogue. 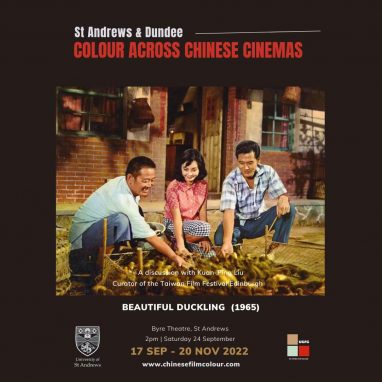 + The screening will be followed by a discussion with Kuan-Ping Liu, Curator of the Taiwan Film Festival Edinburgh and Peize Li (PhD Candidate in Film Studies, University of St Andrews)

In this rural melodrama, the relationship between duck farmer Lin Tsai-tien (Ko Hsiang-Ting) and his devoted daughter Hsiao-yue (Tang Pao-Yun) is tested by opera performer Chao-fu (Ou Wei), who threatens to reveal the dark secrets of this family’s past. Considered a classic of Taiwan’s ‘Golden Age’ of filmmaking, the film received awards for Best Picture, Best Director and Best Cinematography at the state’s recently established Golden Horse Awards. The film is also well-known for launching the career of film star Tang Pao-Yun, which historian Menghsin C. Horng notes garnered her the nickname of ‘Duckling Princess’. Among the first wave of domestically produced colour features in Taiwan, the film was produced by the Central Motion Picture Corporation, owned by the Chinese Nationalist Party (or Kuomintang / KMT). As film scholar Chih-Heng notes, only 30% of Mandarin-language films made in Taiwan appeared in colour at this time, marking Beautiful Duckling as a rarity of the period. Yet colour played a crucial role in the evolution of Healthy Realism, a distinctive genre promoted by the KMT government from the 1960s to encourage positive civic virtues and the development of a thriving, modern state. Although inspired by post-war Italian Neo-Realist films and leftist Shanghai cinema of the 1930s, Healthy Realism avoided the pessimistic associations of its predecessors and instead focused on positive virtues such as morality, altruism, fairness, and civic duty. These values were implicitly rendered as advantages of the supposedly benevolent governance of the KMT and imagined as a shared cultural connection between Mandarin and Taiwanese traditions. One of the founding films of the genre, Beautiful Duckling highlights the valuable role colour played in enhancing cinema’s realist aesthetic, not least through its lush depiction of Taiwan’s picturesque countryside, inspired by the watercolour landscapes of famed Taiwanese painter Ran In-Ting. Indeed, this palette helped distinguish the realism of these films from their earlier European and Chinese counterparts (typically captured in the shadowy greys of black-and-white), lending a brighter, airy atmosphere to these bitter-sweet tales of everyday life in Taiwan. 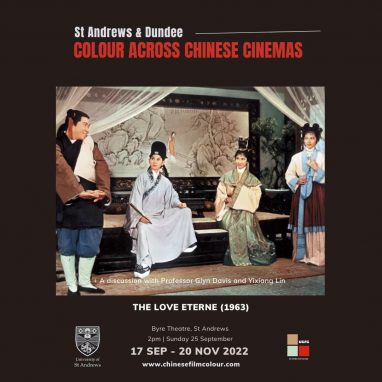 The Love Eterne is one of many adaptations of the Chinese folktale of Liang Shanbo Yu Zhu Yingtai or ‘the butterfly lovers’. Set in the Jin Dynasty era, the story follows Zhu Yingtai, a young woman who disguises herself as a man to study at an all-male school. There, she and her male classmate Liang Shanbo fall in love, beginning a legendary romance immortalised countless times in novels, poems, plays, and paintings, as well as film and television. The story had already proved a popular subject for colour filmmaking in China, serving as the basis for the nation’s first colour film made under communist rule (The Butterfly Lovers, Sang Hu, 1954), yet the Shaw Brothers Huangmei opera version endured an unparalleled popularity, breaking box-office records in Taiwan and garnering a cult following there. As Taiwanese film critic Peggy Hsiung-Ping Chiao recalled: “Before it, films were seen only once. The Love Eterne prompted the practice of viewing and re-reviewing a film. Everyone compared how many times he or she had seen The Love Eterne. And there were many who saw it twenty or thirty times. The newspapers reported that an elderly woman the film 120 times … Housewives, young women, and children memorized the lyrics …” Like many operatic adaptations of the tale, The Love Eterne features two women playing the principal roles: Ling Po stars as the male character Liang Shanbo (one of many male characters she played in her career), while Le Di plays Zhu Yingtai, a woman masquerading as a man within the film’s narrative. This casting further complicates the multiple forms of gender reversal and same-sex romance at the heart of the story, which have made the film a rich topic for debate around its depiction of queer and trans identities, as well as its queer fandom. Colour plays an important role in the construction of these gender roles. Long associated with feminine forms of adornment (whether through cosmetics or clothing), colour also has deep historical associations with queer self-fashioning (most vividly symbolised in the rainbow pride flag). Yet it is also colour’s instability (as a phenomenon that shifts depending on the perceiver) that makes its use in The Love Eterne—a film about personal transformation—particularly apt.

Please book your free ticket here.
This screening is co-sponsored by The St Andrews Institute for Gender Studies (StAIGS) 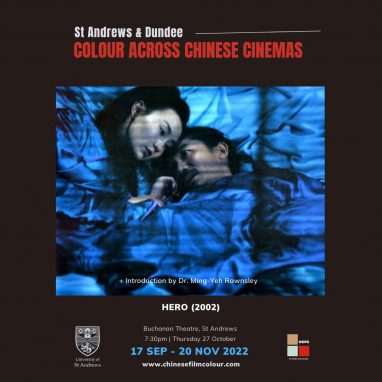 Nominated for an Academy Award for Best Foreign Language Film, this sumptuous period film set in ancient China is loosely based on the well-known assassination plots against the despotic King of Qin—a historical tale transformed here into a ravishing classic of the Wuxia martial arts genre. The most expensive film made in China at the time of its release, Hero is best known for its stunning effects, remarkable fight sequences and vivid colour. Director Zhang Yimou is perhaps China’s most famed film colourist. Establishing colour as a key element of his visual style when he emerged on the international art cinema circuit in the 1980s and 1990s, his work continues to push the boundaries of colour’s expressive potential. In his most famous early works, colour spills over into the narrative of his films whether the flowing red wine of Red Sorghum (1988), the prismatic dye vats of Ju Dou (1990) or the titular flaming lanterns of Raise the Red Lantern (1991). In Hero, the highly stylised colour coding of the film’s sequences invites audiences to speculate about the purpose of these hues, which may carry deep symbolic meaning or purely function as a gorgeous, decorative, surfaces. The opulent palette for Hero was not determined solely by the director however, but developed in consultation with both Australian cinematographer Christopher Doyle (best known for his collaborations with Hong Kong director Wong Kar-Wai) and Australian post-production firm Cinevex Atlab, who undertook the film’s stunning digital colour grading. 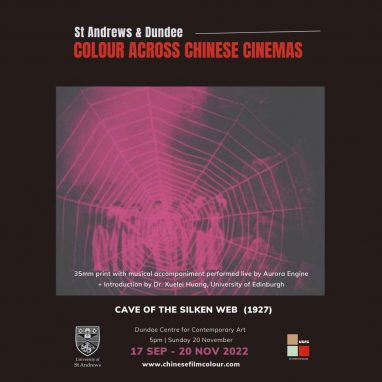 Cave of the Silken Web is an extremely rare treasure of early cinema as so few films from this period of Chinese film history survive. Although this film was long thought lost, its discovery and subsequent restoration by the National Library of Norway in 2014 meant a new generation of audiences could enjoy this remarkable film, albeit in an incomplete version. The film’s story derives from the classic Chinese novel Journey to the West, written by Ming Dynasty author Wu Cheng’en. Based on the real-life travels of Buddhist monk Xuanzang, the novel follows his progress into India to retrieve sacred texts, accompanied by his guardians, Monkey, Pig, and Sandy. Here, we meet these characters along their journey as they encounter spider-demon temptresses, determined not only to seduce, but also eat our protagonists. The survival of this rare print is made even more remarkable by the fact that it retains its colours, which would have originally been achieved by dipping the filmstrip in tanks of dye (a process known as ‘tinting’). This was a common practice in films of the silent era, used to achieve different atmospheric effects and often indicating changes in lighting conditions, whether a shift from day to night, inside to outside, or sunlight to candlelight. However, by no means were there fixed colour codes at this time, and the use of different hues in Cave of the Silken Web invites viewers to produce their own interpretations of its shifting colour scheme. At times the colours lend a naturalistic palette suggesting the warm glow of firelight or the freshness of the outdoors, yet in other sequences sickly greens and scorching magentas lend the story an otherworldly feel.

Deborah Shaw / Aurora Engine is a harpist, pianist, vocalist, and composer based in Scotland. Her trademark sound blends real instruments with electroacoustic techniques. As a multi- instrumentalist Shaw combines traditional and extended instrumental techniques weaving acoustic work with music technology creating etheral and experimental sounds. You can read more about her work at www.auroraengine.com