This is a transcription of a keynote speech delivered by us recently at King’s College as part of the ‘China Week’ (October 25-29).

Not many people know, The Mermaid, directed by Stephen Chow is perhaps the first ever commercial Chinese film that put environmental issues at the core of its narrative; which at the same time, gained a successful box-office in China grossing over £300 million. If you attended the screening that we organised for ‘China Week’ yesterday, Smog Town, you will notice how The Mermaid takes a very different approach. While Smog Town is a niche documentary which appeals to a very specific group of audience, mostly academics, activists and public intellectuals alike, The Mermaid is designed to speak to a broader audience. This is also our curatorial strategy for this programme, contrasting two very different ways of addressing environmental issues in China via the medium of film.

Certainly, Stephen Chow’s name helps with that effect. Being one of the most widely known comedian actors and directors from Hong Kong SAR, Chow has been enjoying a public popularity across the Chinese community (at home and abroad) for decades. If we would like to engage the wider public to pay attention to the topic of global environmental issues in China , which format will be more accessible and what kind of storytelling is more compelling? A top-down critical voice, or a friendly easy-going-esque comedy like The Mermaid which you are about to see? I will leave this as an open question here.

I propose that we should celebrate films like The Mermaid in our time more than ever. We, those who work in academia need to learn how to talk to the public urgently, more than ever. This is not just because we are once again arriving at a critical low point in UK-China relations, but  also because the recent economic and cultural growth in the Chinese film industry has not necessarily gained China a better image in international media. My colleague Giulia will now elaborate this point further. 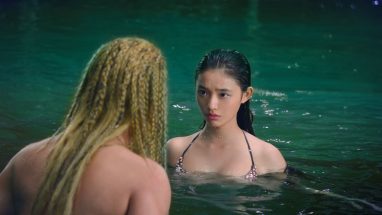 The Curse of Wolf Warrior Series

Wolf Warrior I and II were two incredibly successful hits in China, with revenues breaking domestic box office records. Wolf Warrior 2 alone earned a total domestic box office of over £600 million, and it had much more resonance than the first one. They are both highly visual, action films revolving around the adventures of the saga’s hero, Leng Feng, who has been described as a Chinese ‘Rambo’. Both films were exported in many countries, including the UK, where however, they did not meet the same enthusiasm they met at home. Indeed, around 98% of the total box office revenues were obtained at home. The reason behind that is easy to guess, being the story one revolving around an image of China as an international superpower, which is finally avenging its pride against the west. Moreover, the films promote a hyper violent masculine ideal which has been defined by someone as ‘toxic masculinity with Chinese characteristics’. Since its release, the term ‘Wolf Warrior’ was adopted by the international relations press to refer to a kind of aggressive diplomacy adopted by China and Chinese extreme nationalism.

Ever since the popularity of Wolf Warriors, Western critics and journalists have adopted a deeply politicised and polemic attitude towards the Chinese film industry. On the other hand, many Chinese blockbusters have tried following similar narratives to WW which, clearly, are working well at home, but not so well in depicting a more positive image of China abroad (despite China may wish to do so from the other side, via these films with strong characters). 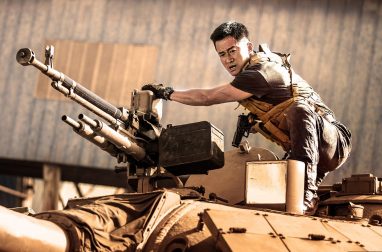 The Chinese film industry is currently being offered an amazing opportunity, as it’s more successful than ever. Moreover, in a time of political tensions between China, the UK, the US and Europe, the cultural industry could really try to create a space for sharing, if not values, at least stories to people from other parts of the world. Different storytelling strategies are needed for Chinese films to rescue us from this low point of soft power – something that is able to cross over and to succeed in gaining overseas audiences’ attention, curiosity and interest. Think about how well South Korea is doing in exporting products such as Parasite and Squid Game, which were incredibly popular because they were telling a story, a concept which, although coming from far, despite the difficulty of reading subtitles, is universal, at least to deeply capitalist societies. Everyone could identify in those stories.

A possible solution is in front of everyone right now: the topic of sustainability and environmental protection is not only of global interest, but of global urgency. From there, showing how China can play as a global actor for a global interest could be a successful direction to take in involving international audiences in the world of Chinese film industry.

Our advocacy to be announced today is combining several ongoing dialogues with a forward looking and innovative perspective. We propose that global sustainability should be adapted in the Chinese film industry as a new storytelling strategy for its future internationalisation. If China wishes to connect with the world via the medium of film, then its narrative needs to be engaging on a topic that concerns a global audience. Sustainability is now a global topic and China is also expected to play a leading role in the next decades to come. We don’t need more war films, or films that celebrate wars; as we have learnt, these films have neither gained a good PR outcome for China. So far, no single country is pushing this storytelling for their commercial cinema development, and only China, can make that exception.

Sustainability has to do with all of us, and is a fundamental topic to look at for the interest of the global future. Shifting the message of films from a war mentality to the recent message that was sent out by President Xi Jinping regarding building a “community with a shared future for mankind” might prepare the basis for a more global generation of Chinese films. The Chinese film industry can perhaps start to acknowledge that the future cannot exclude global sustainability in their filmmaking. If we follow China’s ambition to expand its economic and cultural influence internationally via its growing film industry (which has now topped the world’s box-office revenue), what we are proposing is the right direction for key players to consider. If we follow the international media regarding their criticism playing on the “wolf warrior” attitude not only in film but also in foreign relations rhetoric, then the focus on ‘global sustainability’, in other words, a “community with a shared future for mankind” could be a good opportunity to shift the current negative perception on China to a more nuance one.

In regards to how this message can be embedded in a film narrative and representation successfully, there is still a lot to explore, so why don’t we start with a good example that we recommend – The Mermaid?

Who are we at UK-China Film Collab?

The UK-China Film Collab was registered as a limited company by guarantee in May 2020, developed from a successful research project funded by the Arts and Humanities Research Council in 2019, led by myself. We are a rising non-profit organisation that is committed to inspire film related collaboration and debate between the UK and Greater China. We are also committed to supporting talent development. Giulia was part of our last edition of Future Talent Programme, where she used her time with us to develop a PhD research proposal. Now, she has just started her PhD studies with Lau China Institute where UK-China Film Collab will act as an industry partner throughout her research here at King’s. The topic that we are addressing today will be a chapter of her PhD thesis, so please do not hesitate to be in touch with her to find out more about her research and interests.

Thank you for listening and we hope you will enjoy the screening.

Opinions and thoughts expressed on this website’s ‘Commentary’ column reflect only the author’s views.
Commentary 10.11.2021