Gary Bettinson is a senior lecturer at Lancaster University, and specialises in Asian cinema. He tells me that the enrollment for the module on Hong Kong cinema has been increasing year by year.

“[Students] come to the course interested in the culture and political tensions that are going on in China and especially between Hong Kong and China and hopefully we show them that there are other points of interest.” Gary says that the students find the experience “refreshing because it’s a very different type of cinema than the ones they’re accustomed to.”

Gary and I spoke a bit about the international nature of the Hong Kong film industry, and what the future holds for international film relations. Why is the interest in Hong Kong film growing, when to an outsider Hong Kong cinema might seem inaccessible? Gary explained one reason – the fact that China is increasingly present in the news, and studying the films has become a way into understanding the country. We discussed some other key factors.

The relations between the UK, Hong Kong and mainland China are undeniably complex, though what is clear is that historical links, created via colonialism, are still felt today, and of course extend beyond film. Before Britain handed Hong Kong over to China in 1997, the British influence on films used to be more obvious. Now, the British influence has been replaced rather by the mainland Chinese influence, but because of the historical links and Hong Kong’s “porous” culture, there is something accessible about Hong Kong cinema to western audiences. Many fans of Hong Kong cinema fear that “something essential and substantial about Hong Kong cinema from the past” is in danger of being lost to the influence of mainland Chinese film.  And some think its already lost, arguing that “Hong Kong’s distinctive cultural identity has simply vanished since since the handover [in 1997]”

Hong Kong filmmakers have fought  to maintain “their traditional genres and their traditional aesthetic styles”, though in the face of finding a place in the international film market, this is not always possible. Fewer films are made in Cantonese than before.  Films are often filmed in Mandarin, and those made in Cantonese are dubbed in Mandarin if they are released on the mainland.

“There are some local filmmakers who have held onto the Cantonese vernacular, and they’re kind of famous for their use of Cantonese slang and […] crude, coarse humour that would not travel well and would not be understood by […] an overseas audience or a mainland audience.” The “offensive comedies” of directors such as Pang Ho-cheung are popular in Hong Kong, but due to their cultural specificity they just don’t translate to other audiences.  Mo lei tau (冇厘头), referring to slapstick and nonsensical humour, often relying on language to drive the jokes, is a genre that is being lost with the shift to films catering to the mainland.  It relies on “slang[…] innuendo and double entendres, and puns, and the things that you can’t translate in subtitles.” Director Stephen Chow left the mo lei tau comedies that he was famous for in Hong Kong, to make the “high concept” films like  ‘Kung Fu Hustle’ and ‘Shaolin Soccer’. He is now based in mainland China, and many lament his movement away from the Cantonese-specific use of language for comedic purposes.

Though it must not be forgotten that “Hong Kong filmmakers sacrifice a large part of their market if they only make films for the Cantonese audience”  and it would be “futile to resist” the influence of the mainland film industry. Which is why most filmmakers opt for co-production, striking a balance between producing low budget Cantonese films for the local audience, and high budget co-productions for the mainland audiences.  Hong Kong filmmakers are therefore “compromising […] they’re absorbing Hollywood and they’re absorbing China, but they’re trying to preserve their traditional, culturally specific[…] film practices and craft traditions.”  Over half of Hong Kong films now are mainland-Hong Kong co-productions.

It is not just the mainland market that has affected Hong Kong. Gary describes the “reciprocal” relationship between  Hong Kong and Hollywood. There was a time when Hong Kong was “almost parasitic on Hollywood.”  The Hong Kong film industry had a reputation for “unofficially” borrowing from “other film industries, especially Hollywood.” Nowadays they’re more likely to launch official remakes. For example, Hong Kong has remade the American films ‘Cellular’ and ‘What Women Want’, with permission from the American studios.

“There was a time in the 90s when Hollywood courted Hong Kong filmmakers and sort of lured them to America to make American films, because Hong Kong films of that period looked really innovative and refreshing.” As a consequence, various stars of the Hong Kong film industry like John Woo, Jackie Chan and Michelle Yeoh emigrated to Hollywood. Hollywood profited from the popularity of these talents and their ability to combine Hong Kong and American film traditions, perhaps illustrated best by Jackie Chan’s use of martial arts in action-comedy films like ‘Rush Hour.’ The impact of Hong Kong on Hollywood is still felt in franchises like The Matrix and Jason Bourne which absorb “a lot of influence from Hong Kong cinema in terms of martial arts action.” 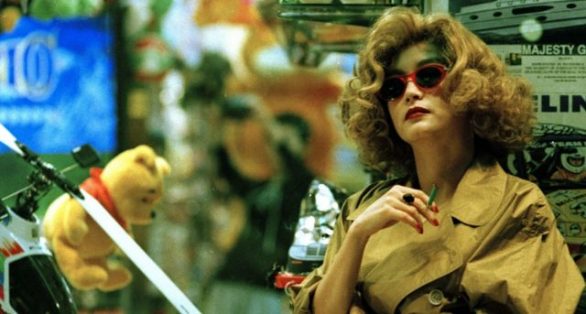 One embodiment of the success of Hong Kong films in the West is the idolised Wong Kar Wai. ‘In the Mood for Love’ repeatedly appears on lists of the “greatest films ever made,” and Wong Kar Wai is one of the few Hong Kong filmmakers who has found such extensive success beyond his local audience.

“Wong Kar Wai came to Western prominence in the 90s when  Hong Kong was still under British rule. […] We were still paying attention to what was happening in Hong Kong; we had a vested interest.”

The films that Wong Kar Wai were making were “unusual”, and a change from the action films like those that Jacke Chan was involved in.  “Wong Kar Wai seemed to attract critics because he seemed to blend Chinese filmmaking with a kind of European art cinema style.” Another “springboard” to success in the west was Quentin Tarantino’s patronage of the 1994 film ‘Chungking Express’. Riding on the success of Pulp Fiction, Tarantino bought ‘Chungking Express’ to distribute in America, which allowed Wong Kar Wai to reach wider audiences and become “visible to Western critics.” For those interested in Hong Kong cinema, Gary explains that ‘Chungking Express’ is a good place to start. It has an “uptempo feel-good” tone, and several “western points of access”, which include English language pop songs on the soundtrack and plays on the familiar romantic comedy and cop drama genres.

Hong Kong cinema, despite a solid local tradition, has historically been a product of international influences, whether that be from Britain, the USA, or the Chinese mainland. Though the loss of “traditional” Hong Kong film might be sad for fans of Cantonese cinema, Hong Kong’s prominence on the international film stage might be a sign that it is our doorway to bridging gaps in the East-West film relations.

Read other articles by Martha Harwood:

Chinese Characters on Screen and the Power of ‘First Cow’: A discussion with Orion Lee

Misrepresentation and Masculinity: A conversation with Dr Derek Hird on Chinese cinema