We attended  a special screening event last week at 195 Piccadilly, held by our friend The Media Pionneers. The event was organised to commemorate the 77th anniversary of the War of Resistance Against Japanese Aggression during the World War II.

Asia-Pacific War Crimes Trial is an award-winning documentary has been broadcasted in China and the United States, and this was the first time it was officially premiered in the United Kingdom on the 2nd of September by its producer SMG Documentary Centre and co-organiser The Media Pioneers, a UK production and distribution company.

With nearly 100 attendees, including descendants of the veterans of World War II and contributors of the documentary, the screening showed one episode detailing Japanese atrocities and the inhumane transportation of Allied prisoners of war in the Pacific and how Chinese fishermen saved the prisoners from sinking ships.

Yu Guo, First Secretary at the culture office of the Chinese Embassy in the UK, said in an opening video that he’s glad to see Shanghai Media Group and The Media Pioneers work together to bring this documentary to British audiences. “Humanity shines in the darkest time, and this part of history should be remembered,” Yu said. 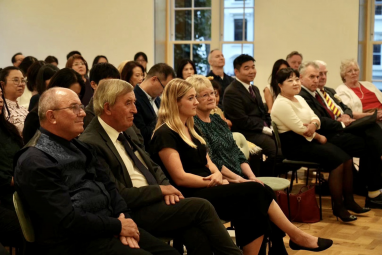 The documentary interviewed Dennis Morley, the last British survivor of the Lisbon Maru who was rescued by Chinese fishermen from a Japanese cargo ship which was sunk by allied forces off Zhoushan, Zhejiang province in 1942. A musician of the second battalion of the Royal Scottish Regiment, then 22-year-old Morley was one of the prisoners held on the Lisbon Maru, and was lucky to escape the sinking ship after it was hit by a torpedo.

Seeing the British prisoners of war jump into the water, Japanese soldiers open fired on them. Morley recollects that “it was the Chinese fisherman that changed everything. When they came out, the Japanese saw them, and that was it. That was when they (Chinese fishermen) started picking us up,” as he said in the documentary when he was interviewed in 2019.

Morley sadly died of complications triggered by COVID-19 in January, but his daughter, Denise Wynne, travelled from Chalford to London to attend the premiere. “I felt overwhelmed and honoured to come and watch the premiere, it is my first time seeing it on the big screen,” said Wynne, with tears in her eyes. “If it wasn’t for the Chinese fishermen, the Japanese would have continued shooting those who escaped from the sinking ship, so I suggest building a memorial for the people who died in the incident and also the fishermen who saved lives,” she said.

Earlier this year, Wynne wrote to President of China Xi Jinping, expressing her gratitude to the Chinese people for the rescue, and firm support for the friendship between the two countries. At the event on Friday, Wynne brought a letter of reply which she received last week. In the letter, the president encouraged family members of the survivors to further work on the advancement of the bilateral friendship as this year marks the 50th anniversary of ambassadorial-level diplomatic relations between China and the UK.

Brian Finch, translator of the book A Faithful Record of the Lisbon Maru Incident, said in a panel discussion after the screening, ” ‘Remember’ is the word that I’d like to say to recommend the documentary to UK audiences — remembering what those people suffered and how people went out of their way to save lives.”

Leone Coyff, Morley’s great-granddaughter, said a memorial of the Lisbon Maru was built in the National Memorial Arboretum in Britain in October. “We’d like to see a twin memorial being replicated in Zhoushan for future generations to visit and remember the past.”

In a tablet Wynne brought with her, she saved many photos of local Chinese in Zhoushan performing a commemoration at the shore and on ships. “If my health allows, I would love to travel to Zhoushan to meet the families of the fishermen when the memorial is built,” said the 73-year-old.