Electric Shadows: Leicester Chinese Film Festival is an inaugural event to be launched in the city of Leicester this winter, scheduled to take place between the 14th and 20th of November.

The festival will not only include a screening programme of the latest Chinese-language films at Showcase Cinema, but also a series of events dedicated to free Mandarin lessons by the Confucius Institute at De Montfort University as well as industry networking at the LCB Depot. This is the first ever festival dedicated to the celebration of Chinese cinema in East Midlands.

Appearing in the UK for the first time in Leicester, the opening film for the inaugural festival will be ‘My Indian Boyfriend’ (2021).

Based on the real love story of the Director Sai Kishore. A romantic drama about an Indian boy falling in love with a Chinese Girl in Hong Kong. The two lovers cope with two different cultures and try to find common ground. 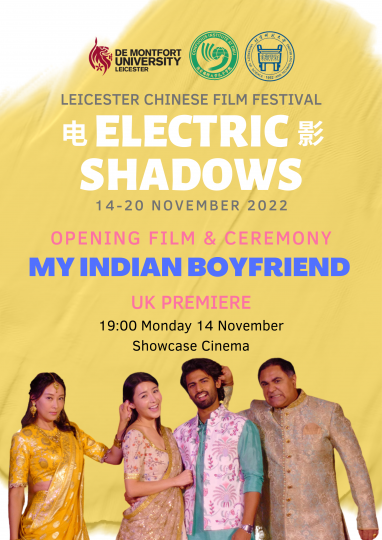 A Chinese and Indian romantic comedy has been thoughtfully chosen as the opening film for the city of Leicester. A UK premiere screening and a opening ceremony will take place on Monday evening, 14 November.

A love story between a Hong Kong Chinese girl and an Indian boy, set in the city of Hong Kong. It encapsulates the drama of conflicts caused by racial discrimination as well as differences in social-cultural, lifestyle, and family values. At the same time, it combines the emotions of tears, joy, and humor with song and dance.

To find out what else will be showing during the festival period, please click here.  For more information, please contact ci@dmu.ac.uk.