Six selected short films compete for Neo Horizon: The Audience Award at Odyssey. You are now being invited to be our juror!

Spring is in the air, and the film industry is bouncing back as the government lifts all Covid-19 restrictions. As filmgoers are returning to the cinema across the UK, screenings of Chinese language films are also making a comeback. We are excited to introduce you to a brand new international programme.

Odyssey: a Chinese cinema season seeks to discover and promote Chinese language film talents in the UK. With audience engagement at its core, the festival is pleased to have curated and now present a screening and award category called Neo Horizon: The Audience Award. In this interactive showcase, our audience will have the opportunity to review and select films which will be nominated for this award.

The curation team of Odyssey published a call for short films between 6th January and 20th February 2022 to invite submissions worldwide. We received 123 submissions in total. Four rounds of review were conducted by the curation team, followed by heated discussions and an internal voting to conclude a final rating. The curation team evaluated the films based on their production quality, storytelling, aesthetics, as well as their consistency with Odyssey’s values.

Based on all the criteria above and a thoughtful assessment process, the curation team finally selected six outstanding short films from all 123 submissions. These refreshing and reflective films explore a vast range of critical issues facing our society today. They transport viewers to a youthful adventure back in the 1980s, remind them of the monastic legacy of a fast-moving industrial society, the culture of the book market in an urban space, and explore the unique relationship between place, city and an individual in a mysterious cinematic world.

When an excavator attempts to destroy a temple, a monk’s ancient faith is finally confronted by modern society: it is from then that he must begin his interrogation of the world.

With a unique composition, ‘Sarira’ dramatises the connection between a city and a temple in contemporary times. Through blending reality and imagination, the film offers a reflection on the contrast between religion and present-day norms, tradition and modernity via a sophisticated audio-visual language.

It’s the 1980s, teenager Xiao Jun encounters a group of gangsters that will change his life. A youthful adventure through an iconic decade, ‘Summer Swing’ is a profound reflection on the spirit of human freedom.

Director Kunao Yan adapts a documentary visual style in this short film, with a colour palette that symbolises the repressive atmosphere of 1980s Chinese society. Yan uses medium shots and close-ups to both convey the protagonists – Xiao Jun’s insignificance in the social order as well as to reveal in detail the richness of his inner world and the subtlety of his emotional changes. Though ‘Summer Swing’ is period-specific, its open ending leaves an ample room for the audience’s imagination to contemplate their own personal lives and place within society.

In a highly abstract society, fireworks are strictly prohibited, and males are routinely castrated. The protagonist has experienced all kinds of hardships that women in this world have endured: parting, childbirth, deprivation of social rights, grief, and death. The only way to express resistance to this prejudiced and disciplined society is through a desolate kind of struggle.

What does a woman need to face after her birth? ‘Herstory’ endeavours to give us an answer. The story transcends time and space as it takes place in a realm of extreme abstraction. The aesthetically rhythmic, melancholic and graceful film creates a character to experience all the hardships and prejudice that a woman experiences in her life: separation, childbirth, unemployment, loss of children, and death. This is a powerful feminist film that echoes current debates related to womanhood and sexuality which the audience will undoubtedly find relevance.

Then She Went on Stage

This is a story about love and courage. Every day after school, Ronan, a junior in class 3, goes to the grocery store to pick up a newspaper with a blue sticky note. As her mother’s life enters a countdown, Ronan can no longer turn a blind eye to her parents’ marriage rift. In her own way, she encourages and convinces her mother to escape for a better life.

This film is a convincing critique of domestic violence in contemporary China. Through a realistic narrative that shows the conflicts and disputes in an ordinary family life, director Yuzhuo Wang delicately portrays the complex and deep bond of kinship. Although marriage may just be a piece of legal paper, the feeling of love cannot be easily restrained. Weaving together a carefully constructed storyline with a compelling voiceover, ‘Then She Went on Stage’ tells an engaging story with a strong sense of immersion.

Made up of shantytowns and brick houses in the Yangpu District, Shanghai, the area of Dinghai Bridge hosts a busy community of workers and immigrants. Ming Zhao is one of the outsiders who chose to run a second-hand bookstore to make a living. He is affectionately known as ‘Mr. Zhao.’ However, with the decline of traditional bookstores, the disappearance of flea market culture, and the future demolition project of Dinghai Bridge, what will happen to Mr. Zhao’s journey?

An elegy to the city’s wanderers, ‘Mr. Zhao’s Second-Hand Bookstore’ reminds me of the post-1990s documentary tradition in China. Through a deft insertion of raw footages featuring the less represented fragments of life in Shanghai, the film heartily follows the bittersweet life of Mr. Zhao and his little bookshop — an enclave of pre-digitalisation lifestyle, now in a state of dilapidation. 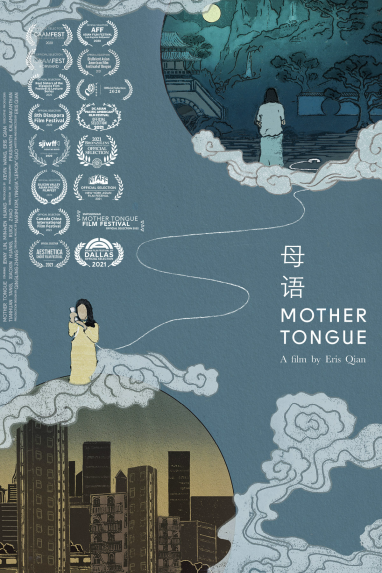 Growing up in the United States, Lisa Lin, a second-generation Chinese American who does not speak any Chinese, thinks her “Chinese” identity is necessary in a cultural melting pot like New York. Only after her mother was diagnosed with Alzheimer’s disease, and eventually forgetting English, does Lisa realise that she had never tried to understand her mother’s world. Will she rediscover her mother tongue?

With her fluid camerawork, softly-lit interiors, and intimate close-ups, director Eris Qian produces a woozy, dreamlike style that feels truly cinematic. The past is rendered as hazy as the present, as Lisa’s position as both an alienated daughter and soon-to-be mother uproots her sense of self. This film subtly uses an ethereal visual language. Tackling the legacies of both culture and love, ‘Mother Tongue’ asks us what connections can be found beyond language – and how we shall pass on our heritage to our loved ones.

Odyssey aims to empower a shared appreciation of film, to create an inclusive cinematic experience, and to encourage cross-cultural understanding. From 10th May to 10th June 2022, with more than 40 films in 6 curated sections, 10 panel discussions and many inspiring Q&A sessions, we will bring you a whole month of outstanding and innovative Chinese cinema that promises to illuminate your mind. The festival will not only introduce the latest young Chinese film talents to the UK audience, but also provide forums for professionals to exchange creativity and business ideas.

Format: Offline in London, Edinburgh, and Online via Shift 72