Across the global film industry, the development of film technology in the field of virtual production is revolutionising the production process from preview to release. Examples include such as The Lord of the Rings to the hit series The Mandalorian in recent years. The innovations of film technology, on one hand, bring audiences an extraordinary visual experience, but on the other hand, they also impact pre-production, shooting and post-production to varying degrees, especially in Sino-British co-productions. How the production teams of the two countries can unify technical standards during production becomes a key factor in the success of the collaboration. At the same time, in this post-epidemic era, what problems can virtual production solve? How rapidly is Virtual Production expected to get into wide-scale adoption？What problems are encountered in Sino-British virtual production? How can we overcome these problems? These are the questions that need to be urgently addressed.

*This forum will be conducted in Chinese and will be broadcast live on CineHello.com. Simultaneous interpretation will be provided by Dr Hiu Man Chan live on Zoom. 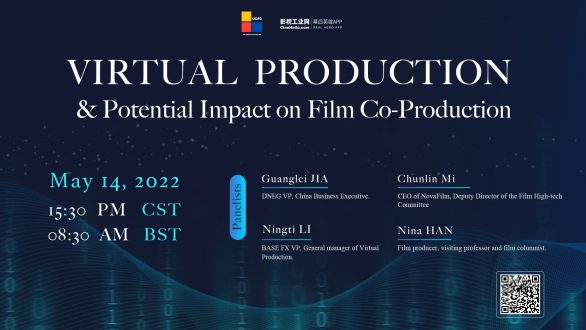 Chunlin Mi, Founder of Novartis Vision, a member of the Visual Effects Society (VES). He has been engaged in the post-production of film and television for 20 years.

Yawen Liu is a graduate of the London Film School with a Master’s degree in International Film Business. She has been involved in the production of many films and TV series (A Song For You, Growing Pain), as well as the distribution of some imported films (The Crew, The Dawns Here are Quiet) to China. Yawen serves as producer at the UK-China Film Collab, over the organisation’s Future Talent Programme in 2022. She developed an original feature film project, Love is not Enough, which tells a story about transracial adoption between the United Kingdom and China in a realistic way of narration.

Panel 4: Potentials and Obstacles for a British cinema showcase in China

Odyssey aims to empower a shared appreciation of film, to create an inclusive cinematic experience, and to encourage cross-cultural understanding. From 10th May to 10th June 2022, with more than 40 films in 8 curated sections, 10 panel discussions and many inspiring Q&A sessions, we will bring you a whole month of outstanding and innovative Chinese cinema that promises to illuminate your mind. The festival will not only introduce the latest young Chinese film talents to the UK audience, but also provide forums for professionals to exchange creativity and business ideas.