As part of the Chinese Cinema Season, the UK-China Film Collab have organised and will host 9 discussion panels during the festival period, between February and April. Dedicated to a wide range of topics, they aim to extend debate and enquiry regarding challenges and possibilities in film-related exchange between the two countries. 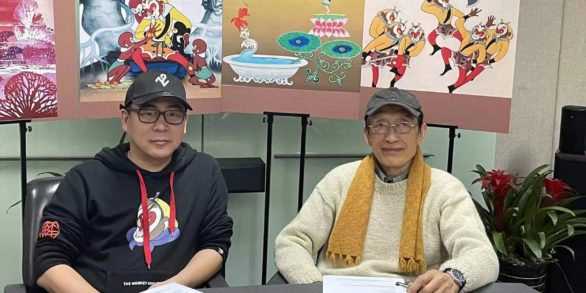 You can now catch up with the panel’s recording here.

In recent years, we experience a growth in animation collaboration between the UK and China. For some examples, both British IPs Peppa Pig and The Octonauts were extended as co-produced feature films and released theatrically. The latter even succeeded in launching a theme park in Shanghai last December. More and more UK companies are looking into collaborating with China. In order to understand what animation means to the Chinese artistically and commercially, we have to learn from their tradition. This panel is curated in parallel to the festival’s screenings of restored classics by the Shanghai Animation Film Studio. Founded in 1957, the SAFS is the most respected animation studio in China. It is famous for its experiment to include traditional Chinese fine and folk art into the making of animation, such as water-ink and paper-cutting.

We are honoured to have special guests joining us from the historic Studio, sharing insights on the tradition of Chinese animation. The panel also explored the future for new innovation.

Chang Guang Xi, former Director of Shanghai Animation Film Studio, one of the most experienced animators in China.  Film director of Lotus Lantern (1999), the first commercial feature Chinese animation (and he is 78 years old!).

The views expressed by panellists do not necessarily reflect those held by the UK- China Film Collab nor Chinese Cinema Season.

To find out more about the festival here: chinesefilm.uk