Presented by Shenzhen Broadway Cinematique, the “Until the End of the World: A Wim Wenders Retrospective” programme has been touring in China since the beginning of 2022. It continues to tour Shenzhen, its home city and Guangzhou between July and August.

Broadway Cinematique is known as the most active cinema chain in China to promote foreign film season to the Chinese cinephiles. Having a close relationship with all foreign embassies in China, it has presented many national seasons throughout the year as an active advocate.

Since the beginning of 2022, the Shenzhen brand of Broadway Cinematique has led a major Wim Wenders retrospective programme title “Until the End of the World”, comprising 10 films by the German film master. 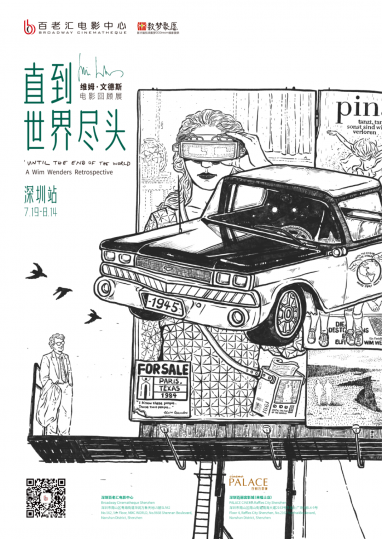 Wim Wenders is a much loved filmmaker by the Chinese film fans for many decades and has always been a top programme choice for film festivals across the country. He has inspired a young generation of Chinese filmmakers, intellectuals and also visited the country on many occasions.

Since the beginning of 2022, the retrospective programme has so far toured Hangzhou, Wuhan, Kunming and is now returning to Shenzhen, its home city and also Guangzhou for August (19 July – 14 August).

10 master pieces have been chosen for this retrospective, these include Paris, Texas, The Goalie’s Anxiety at the Penalty Kick, Wings of Desire, A Trick of the Light, Buena Vista Social Club, Peter Handke: In the Woods, Might Be Late, Pina 3D, The State of Things, Tokyo-Ga, Faraway, So Close!.

The retrospective programme is co-presented by DD Dream.