Organised by Unifrance in partnership with the Ambassade de France in China, the 18th French Film Panorama in China opened in Beijing on 5 May 2022 and has recently finished touring after 2 months.

The selection of 8 feature films, proposed by the Chinese distributors themselves, illustrates the diversity of talent in French cinema, highlighting established directors, emerging filmmakers, and renowned performers. 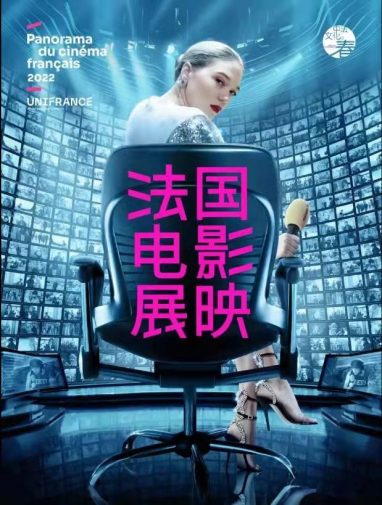 A Panorama present in 9 Chinese cities

The screenings took place in the theaters of the two partner networks, Lumière Pavilions and Broadway. The Panorama toured from May 5 through July 2022 to 9 cities in China, each of which hosted an individual opening ceremony. The cities participating in the Panorama for the 2022 edition were Chengdu, Dalian, Guangzhou, Kunming, Beijing, Shanghai, Shenzhen, Wuhan and Xi’an.

Chinese director Lou Ye was selected to be the festival’s ambassador this year. His films have been celebrated at Cannes (Screenplay Award 2009) and Berlin (Silver Bear for Outstanding Artistic Contribution 2014). Lou Ye’s feature films include Summer Palace, Spring Fever, Love and Bruises, Mystery, and Blind Massage, all produced in collaboration with France. He will be knighted in the Arts and Letters at the opening of Panorama in Beijing.

The 18th French Film Panorama was organised with support from Groupama, the French Republic, Institut français, PROCIREP, CNC, and TitraFilm.

Meanwhile, a similar British cinema season is yet to be seen in China. This is a topic that we have been advocating since 2017 and will continue to do so.