The award-wining Chinese art-house film hits this year, Return to Dust, will be released in all major cities in the UK from 4 November.

Tender tale on the transformative nature of love. 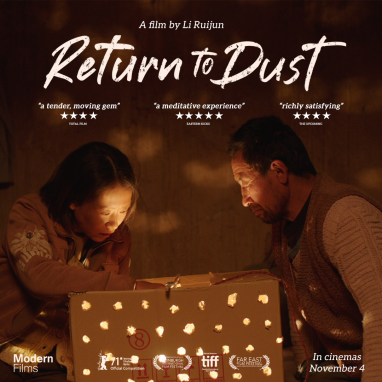 Humble, unassuming Ma and timid Cao have been cast off by their families and forced into an arranged marriage. They have to combine their strength and build a home to survive. In the face of much adversity, an unexpected bond begins to blossom, as both Ma and Cao, uniting with Earth’s cycles, create a haven for themselves in which they can thrive. A story about eternal love, against the odds.

It is said that film is the art of time. In this sense, a movie director’s work is essentially the same to that of farmers. In movie making, we are constantly faced with issues dealing with time and life. Farmers trust land and time with their crops and livelihood, so shall we trust land and time with our movies. The words on paper, like seeds growing into harvest, are transformed by camera shots into what we remembered in our distant memories.